The New School of Montpelier demonstrates the transition process for businesses wanting to maintain
a strong mission (education), strong outside support, and collaboration among lenders. 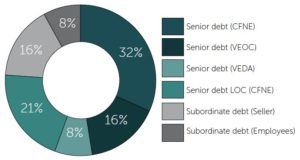 The New School of Montpelier (NSM or the School) is a year-round special education day school for Vermont’s unique learners, ages 6-22, approved by the Vermont State Board of Education. Founded in 2005 by Susan Kimmerly, the NSM serves primarily children and young adults with autism, cognitive disabilities, and challenging behaviors, often related to trauma. The NSM provides a safe and encouraging environment for students to form relationships, develop trust, gain life skills and the social competencies necessary to become successful learners and contributing members of their communities.

The employees of the school formed a cooperative to purchase the school and continue its operations as an employee-owned cooperative. The cooperative incorporated as a C-Corp, with all members owning equal shares. The member-owners elect a Board of Directors who hire a director to manage the day-to-day operations. All employees are eligible for membership after two years of employment and, after three years, are required to apply for membership or request an exception. Aside from establishing a democratically elected board of directors, the previous hierarchic management structure remains intact.

The School has served 24 public schools and 64 students, has 44 employees, and gross revenues of approximately $2 million annually. The school operates in three rented buildings – two are owned by the selling owner of the school. The cooperative has the option to purchase these two buildings once the debt to purchase the business has been repaid. The cooperative rents a third property from the VT College of Fine Arts.

At the time of conversion, 37 of the eligible 38 employees committed to becoming worker-owners. It was noted by steering committee members that employee retention had improved noticeably since the cooperative development process began in 2012.

The conversion process at the New School began as owner Susan Kimmerly began to consider her succession planning options. She was not interested in selling the school to the most likely buyers, mostly for fear of what would happen to the quality of service. Susan first learned about employee ownership after Marcel Rocheleau, her husband and co-owner, attended a seminar offered by the Vermont Employee Ownership Center (VEOC) entitled “Selling to the Employees: Employee Ownership as a Path for Business.” Susan and other employees decided to learn more about the process at the VEOC’s annual conference, after which they reached out to Don Jamison, program director at VEOC, to discuss next steps.

Susan liked the idea of selling to employees, and felt that the cooperative ethos would be a good fit for the school and the culture of caring that had developed there over the years. After gauging interest with the current employees of New School, VEOC proposed to provide the owners and employees with program management services designed to facilitate a transition from the school’s present ownership and governance structure to a worker cooperative structure. VEOC worked with New School to find the right service providers, educate staff about worker cooperatives, help New School establish committees to lead the company through the process, and more.

How Sales Price was Determined

The purchase price of $200,000 was based on a valuation prepared by a mutually-agreed upon local valuation expert, and the sale was structured as a stock rather than asset sale, so the coop could retain the school’s license and contracts.

The above sources do not include the expected $19,000 of member equity to be invested in the School by the end of their first year, which represents 38 worker-owners’ $500 equity investment.

The cooperative incorporated as a C-Corp, with all members owning equal shares. During the transition, a five-member steering committee met weekly, while an eight-member management team including the selling director-owner managed the School. Together, these groups devoted over 2,500 hours to cooperative development. The worker-owners elect a Board of Directors who hire a director to manage the day-to-day operations. Aside from establishment of a board of directors, the management structure has remained the same as a cooperative as it was under the sole-proprietorship. The selling owner agreed to stay on for two years, through 2016, to assist with the transition.

Projected cash flows support the debt repayment. Loan repayment is accomplished through the School’s sole source of income: student tuition funded by federal sources and administered by local schools and school districts. The rates for services are set by the Vermont Board of Education. The School had suffered operating losses when the Vermont Board of Education instituted a tuition freeze, but the School appealed and was approved for subsequent rate increases. School management demonstrated its ability to weather these challenges and maintain positive net equity. Through the purchase, the business assumed debt of $200,000 which exceeded what it had serviced in the past. The calculated debt service coverage ratio was strong for years one (1.40)and two (1.69); and the fact that the business had weathered tight cash flow successfully in the past was considered by the loan committee.

Almost all employees became or are committed to becoming worker-owners, including both teachers and other personnel. The equity requirement is $500 per member, with $19,000 due in the first year. There were also $25,000 of worker-owner loans, and net equity (retained earnings) of almost $140,000 at the time of purchase.

As a service business operating in leased property, the coop’s collateral was limited to contracts for its business and furniture and equipment. Tuition contract receivables at the end of the school year (July 1, 2014) totaled $2.5 million, discounted 50% provided a collateral value of $1.25 million. Equipment collateral value was $15,000. Because of the weak nature of the collateral, the CFNE loan committee considered requesting personal guarantees from the worker-owners. Ultimately, it was decided that personal guarantees were not necessary. And further, CFNE was able to provide the loan from funds in its designated collateral pool, until accounts receivable were available to serve as collateral.

The New School has a distinct market niche to serve students with special needs that cannot be met by the public school system. There is often a waiting list for the School’s services. The School has created and maintains strong connections with the cooperative movement and the Vermont Employee Ownership Center and they have demonstrated receptivity to peer and consultant advice.

There was a strong mission fit for the CFNE with the ability to preserve 44 jobs and enable a business succession to cooperative ownership.

Key to the success was the significant amount of technical assistance provided by the Vermont Employee Ownership Center which assisted in the cooperative’s formation, and in the structuring of the financing package. Where there were financing gaps and lack of collateral, the worker-owner loans and seller financing provided the bridge.

This deal highlights the importance of cooperation among lenders, to work together to negotiate collateral positions, and structure a deal that serves everyone.