Why it became a coop 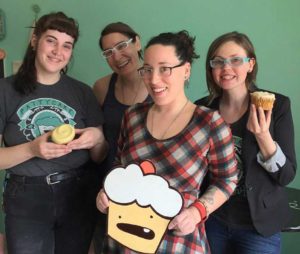 Although founder Jennie Scheinbach always dreamed of converting Pattycake to worker ownership, Pattycake operated for 9 years as a sole proprietorship before the bakery’s transition to a worker-owned cooperative became a reality. Scheinbach saw worker ownership as a way to run her business without “exploiting the labor” of her employees, and openly discussed her intention to convert Pattycake to a worker-coop with her employees from the bakery’s founding. When Pattycake finally reached a place where it could begin its transition to worker ownership, Scheinbach says that Pattycake employees “were already so invested in our mission and values, it seemed a natural extension for them to take part in real ownership.” As a sole proprietorship, Pattycake was “already behaving like a coop” in many aspects, says Scheinbach; legalizing the cooperative structure merely “made things reflect reality,” in terms of employees’ existing investment in the business.

Pattycake reached out to the Ohio Employee Ownership Center (OEOC) for advice about how to move forward with the conversion to worker ownership. In addition to advising Pattycake about how it might re-structure as a cooperative, the OEOC connected the company with an attorney and an accountant to facilitate the logistics of the buy-out and conversion process. Additionally, Pattycake sought guidance from other cooperatives, and used the bylaws of several other worker cooperatives as models for its own. Scheinbach notes that, although the decision to hire external expert advisors was difficult for Pattycake, given that she and her former employees are very “do-it-yourself”-minded, it exponentially accelerated the conversion to worker ownership. What had been taking years to accomplish was quickly condensed into a 3-month conversion process with the guidance of local worker ownership experts.

Pattycake was able to entirely self-finance its conversion to a worker cooperative for two reasons. First, the business was highly successful before its conversion; and second, Scheinbach had consciously saved up the revenues generated by Pattycake’s thriving business over the years instead of taking the savings out as profits or re-investing them in the company. As a result of Scheinbach’s foresight, at the time of the buy-out, the cooperative was able to pay her the equivalent of the value of the company from Pattycake’s internal funds. After commissioning a professional valuation of the business, the fledgling cooperative paid Scheinbach one-third the value of the company at the time of the sale, and spread the payment of the other two-thirds over ten years in the form of a note.

As of 2014, Pattycake has five worker-owners, including Jennie Scheinbach, and 10 non-owner employees. Pattycake’s board is composed of its five worker-owners, which will remain the case until the bakery’s membership grows to nine worker-owners. The cooperative operates entirely under consensus, and in addition to monthly board meetings, owners hold frequent small meetings and send out weekly communications to all employees—worker-owners and non-owner employees alike. These constant internal communication efforts are designed to allow the company’s consensus-based decision-making model to remain efficient.

Pattycake’s membership requirements mandate that prospective worker-owners must commit to a one-year probationary period, during which they are required to attend three board meetings and to read and agree to the cooperative’s bylaws. Each new worker-owner must also invest $5,000 of equity in the cooperative, which he or she may pay off over a 5-year period. Although these membership requirements have served the cooperative well so far, Scheinbach says Pattycake “could and should do more” to further prepare people for ownership during the one-year probationary period for new members.

Pattycake operates under the umbrella organization of the P-Cake Allstars Cooperative. As of August 2014, the cooperative also had plans to open City Beet, a natural foods worker cooperative cafe, in the near future.

Several factors slowed Pattycake’s transition from sole proprietorship to worker-owned cooperative. According to Scheinbach, the lack of institutional support for and general understanding of coops in the United States proved to be one early barrier to the conversion. Because of this lack of support, she says, Pattycake’s employees weren’t immediately ready to make the commitment to become owners of a coop, and some were skeptical that worker ownership could be a successful business model. Over the years, gradual exposure to the concept of worker ownership helped Pattycake’s employees to become more comfortable with the idea of cooperative ownership, until eventually all employees were in favor of becoming a worker cooperative. Note that not every employee was interested in becoming a worker-owner themselves, all were in favor of converting the business into a worker cooperative.

Additionally, Scheinbach described how a lack of trust among staff members was another obstacle that Pattycake had to overcome during its conversion to cooperative ownership. For a long time, Scheinbach said, Pattycake’s staff seemed to have more trust in her–as the owner–than in each other. Learning to trust one another with the responsibilities of ownership proved to be one of the biggest challenges encountered by the bakery during its transition to worker ownership. Even today, notes Scheinbach, trust in each other among members isn’t 100%, but they have learned that it doesn’t need to be for the cooperative to function well. Each member trusts every other to care about Pattycake, and to want it to succeed. Personality conflicts do exist, as they do in any workplace, but shared ownership assures members that each individual has Pattycake’s best interests at heart.

A key part of why Pattycake has seen such success as a new worker-owned cooperative is because the business was already highly successful before becoming worker-owned, according to Scheinbach. Pattycake’s conversion was not a strategy for turning around a failing business; and, because Pattycake was already doing well, says Scheinbach, and its staff knew how to run a successful business, it was relatively easy for them to make the transition to worker ownership.

Pattycake’s attention to the importance of maintaining consistent communication among staff members—particularly between owners and employees—is another factor credited by Scheinbach as contributing to Pattycake’s successful transition to employee ownership. Scheinbach notes that because the conversion was confusing at times for Pattycake’s non-owner employees, given their lesser involvement in the nuts and bolts of the process, the board decided to begin sending weekly updates about issues in the business to all staff members, owners and non-owners alike. In keeping all workers well informed about the bakery’s operations and direction, these weekly updates serve as a critical foundation for Pattycake’s participatory culture.

Another example of how participation drives Pattycake’s operations and characterizes the businesses’ internal culture can be found in the bakery’s transparent pay scale. The pay scale is voted on and visible to all members, which not only maintains Pattycake’s participatory culture, but also works to reduce the income gap between owners and employees.

Pattycake’s conversion story illustrates how worker ownership can be effectively integrated into a thriving business to enhance the impact the business has on its employees and its community.

This case study is based on Project Equity’s interview with Jennie Scheinbach, founder and current worker-owner of Pattycake Bakery in July 2014.