I’m Toto. I started working at Niles Pie in May 2015. I was hired to work at the farmers’ markets after my contract was over as a data analyst for the IRS. 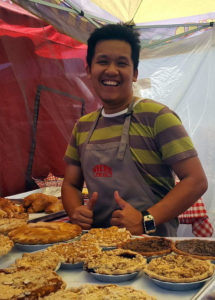 What made you decide to work at Niles Pie Company and what kept you working there?

What was your previous job like before working here? How is this company different?

In my previous job I was working in an office with cubicles. Given the nature of the work it was a high security job and there were restrictions what we could have and not have at our desks, for example, no one was allowed to have their mobile phones during work hours. It paid well and had benefits, but it just wasn’t the right fit. I’ve been able to apply some of my analyst skills at Niles Pie but it’s really very basic, nothing like the advanced data analysis I did in my previous job.

What do you like about working at Niles Pie.

I really like the people we serve and the team I work with. (No one hates each other.) Everything works perfectly because we all work together. We don’t bring negative energy to our workplace which is really great. And we keep looking forward. Everyone is on the same page – it’s awesome and I think it’s hard to find these days in many jobs.

What is different now that you are an owner? What is the same?

Well, I’m looking at the job and business from a very different perspective now that I’m an owner. I’m looking more at long term goals and planning is a big part of what we do now on a regular basis. It’s been difficult to adjust to being both an owner and a worker – I have to switch up hats all the time.

Why did you want to become a worker cooperative?

I think it’s both something new and it seems like something I will really like and be into. I have new incentives, I have more ownership and I have more responsibility. My voice can be heard and I can make changes for the company. These are all really reasons why I was interested in becoming a worker coop.

What was the most scary thing for you when you started the process to convert to a cooperative?

Initially it was overwhelming learning about what a cooperative is. It was hard because I just did not have any idea what it meant. Now I was looking at the numbers and our principles. As a cooperative we have our core values and we try to abide by them which is really good. I never thought of it in this way before we started the project.

What has been difficult that you thought would be easy?

Being a director has been difficult – that’s the job title for the employee owners. The job of director is taking off the worker hat and putting on the director’s hat which means I have to think about the long-term success of the company. Bigger picture thinking can be difficult when I also need to do the daily operations.

What has been easy that you thought would be difficult?

Voting. Voting for time off, pay raises and other things. I thought these would be difficult but it hasn’t been. We get to decide what we want to do and we get to figure out how to make it work. I still haven’t fully grasped being a director yet but there is more paperwork and lots of meetings.

What would you tell someone who was considering becoming a cooperative?

I would tell them to research what it takes to be a cooperative. Go to other coops and learn from them. Be on the same level with your co-workers and explain thoroughly what it will take and the sacrifice it will take to become a coop. Know about the buy in amount, the time investment, and the processes of becoming a co-owner. This takes 6 mos to 2 years to become a full member and you have to be committed and you have to recruit the right people who will also be committed. Actually I’m still on the fence if employee cooperatives are a route that I would recommend to others. I’m still learning so I don’t want to just say I recommend it!

What do your family and friends think of you being an owner now?

Well, they think I own the shop and I can do whatever I want. Not so!  I basically do the same things I did before, AND, now that I’m an owner I have additional responsibilities. I tell them, no, I can’t do whatever I want, we have policies that guide us. Our attorney also helped us hash out the guidelines to being a member.

Did you ever think you would own a business? (why or why not)

Yes I did, and I think in the future, after Niles Pie I would like to own my own shop. Maybe a small diner. I would start it as a sole proprietor and recruit for employee owners to eventually become a coop. I would be aware of the risk of losing money and the risk of company going under before becoming a coop.

What are your dreams for the business?

We want to grow the business more and supply cafes and coffee shops with our baked goods. And we want to make our products with no harmful chemicals and always be locally-based.

How do you see the new ownership affecting your customers? Your community?

The community loves that we’re a cooperative now. They see it as a positive thing. They see that the workers have a say in the outcome of the company and they see that we have more security and more say in how the company is run and how it succeeds.

Check It Out
