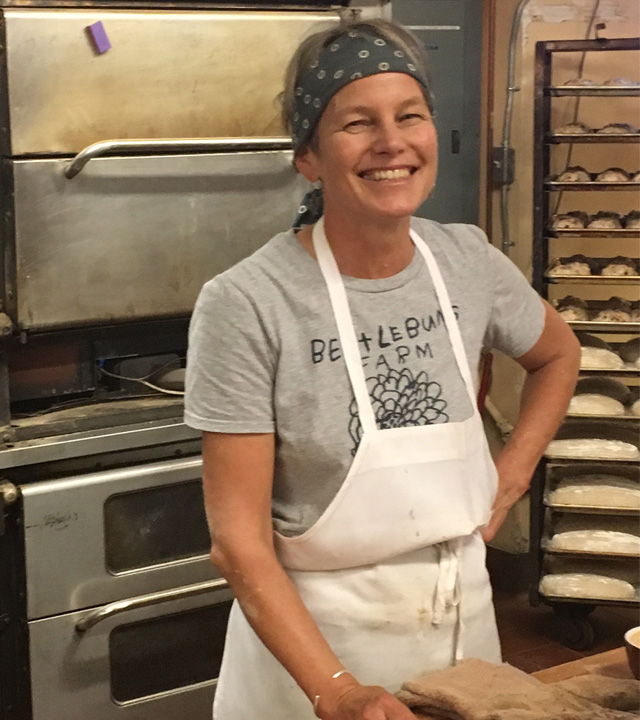 Martha is enjoying her East Bay life, two grown kids flourishing on the East Coast, a good running practice, a vegetable garden, backyard hens and over 20 years of baking with the Arizmendi Association.

Martha became a regular customer of The Cheese Board during her studies at UC Berkeley in the mid-1970’s in pursuit of a degree in Conservation of Natural Resources. She was already friends with Ursula and Stephanie, two like-minded bakery gals that are still Cheese Board members today. In the late 1980’s her friends at The Cheese Board asked if she’d be interested in applying for a job, they were in the middle of a baby boom and needed more bakers. Coincidentally, Martha also was pregnant and the timing wasn’t right.

Meanwhile, Martha worked as a cook and kitchen manager at Bette’s Diner in Berkeley but always kept up her interest in democratic group process, consensus and group decision making.  When the idea of Arizmendi Bakery started to brew, her Cheese Board friends, once again, gave her the heads-up about this exciting opportunity to get in on the ground floor. Arizmendi, modeled after The Cheese Board, benefited from the wisdom, donated recipes, financial support and generosity of their partner store.

Martha is part of the founding group that formed the first Arizmendi Bakery in 1997 on Lakeshore in Oakland. During their first group meeting, she recalls, they nervously looked at each other, feeling like they were all part of some group arranged marriage, what was in store?  As the first of more Arizmendi bakeries to come, there was a lot of trial by fire and their opening process was not replicated with the subsequent shops.  The founding group worked closely with a development team for almost two years. They worked out EVERY detail of opening a cooperative bakery collectively from selecting the site to managing the build out and purchasing equipment. During this time they still attending regular cooperative meetings to build the organizational internal structure of the new business. All of the by-laws, policies and systems were built from scratch.

This very committed group opened the doors, in August of 1997, to an eagerly awaiting clientele and started, from day one, as a booming business. As they continued to grow the business and their group there were many successes, as well as many challenges. Group dynamics can be difficult and differences in direction presented the group with hurdles that every cooperative has grappled with.  After 3 years working at Arizmendi Lakeshore, Martha was recruited to be part of the start up team for the second Arizmendi and stepped down from her position at Lakeshore. Arizmendi 9th Avenue in San Francisco opened it’s doors in October 2000 thanks, in large part, due to the development team that Martha was part of. By Spring 2001, the training wheels were taken off of 9th Ave and Martha found herself, once again, working at Bette’s Diner.

Almost 25 years after her first introduction to The Cheese Board, Martha applied and received a candidacy position with them in October of 2001. The last 15 years, being part of a well established cooperative, has been a new cooperative experience for Martha, as it differs, in many ways, with founding a brand new business. Martha cherishes her Arizmendi experience, it has helped inform her and the new generation of Cheese Boarders in finding new ways to improve upon internal systems and processes that have been informally grandfathered in over the past 49 years.

Currently, you can find Martha splitting her production time between The Cheese Board Pizza and The Cheese Board Bakery.  Over the past 6 years, she has also assisted with bakery production at Arizmendi San Rafael. Her committee work is presently focused on BIG picture issues and opportunities for the Cheese Board. One main project is The Cheese Board’s acquisition of the Ink Works building in Berkeley, which she has optimistically referred to as “a place holder for dreams”.  The future is sure to be rosy for Martha and The Cheese Board, her belief and excitement in the cooperative movement is infectious, as is her love of baking, and that’s a recipe for success that should be replicated.