Real Pickles Cooperative illustrates the benefits of a deep customer and community network, which enabled its use of a Direct Public Offering to raise capital. 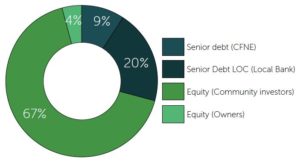 Industry
Real Pickles (RP) is a mission-driven, food manufacturing company based in Greenfield, MA, creating high-quality, locally-grown, organic, fermented vegetables (including pickles), since 2001. RP’s mission is to promote human and ecological health by providing people with delicious, nourishing food and by working toward a regional, organic food system. They have a clearly stated social mission that includes supporting expansion of the local food arena in western MA and the Northeast.

Cause of Conversion
Conversion to a worker-owned coop was initiated by owners and achieved to provide long-term social mission protection, enhance workplace democracy, create incentives for staff to remain at RP on a long-term basis, and eventually allow the business to operate effectively without dependence on its founders.

The founding owner Dan Rosenberg would stay on with the business, and he continues today to serve as General Manager, as well, Addie Rose Holland stayed on as Marketing Manager. The conversion from a proprietorship to a cooperative corporation as defined by Massachusetts General Law Chapter 157 was accomplished in May 2013.

Sale Price
The coop and the owners agreed upon a sale price of $523,795, which included $400,000 of goodwill, based on a five-year sales and marketing plan developed by the founding worker-owners that showed reasonable assurance that the debt would be repaid. The coop relied on two accountants to affirm that this price was reasonable, first by the company’s accountant, and then by a second, independent, accountant using an industry-standard multiple of eight to eleven times cash flow.

Unlike privately-owned or publicly-traded corporations, cooperatively-owned businesses must avoid raising equity by selling controlling shares of the company to anyone who is not an employee-owner. The usual investing avenues of seeking venture capital or common stock offerings are not as readily available. However, the use of preferred shares that do not convey any ownership rights is a viable option.

Real Pickles augmented the CCF patient capital loan by making a direct public offering (DPO) that raised equity through the sale of non-voting preferred stock. In two months, in early 2013, RP raised $500,000 from seventy-seven local investors. The DPO allowed the coop to raise needed equity without ceding governance control to outside interests and, therefore, maintaining the business’ social mission. The coop set an annual target dividend on these shares at 4%, with the shares redeemable by the holder after five years. Finally, each worker-owner committed to contribute $6,000 each towards the purchase of a voting share. This contribution was determined to show a significant commitment by the worker-owners while maintaining affordability.

In this case, CFNE made the loan from a separate, affiliated, entity: The Cooperative Capital Fund, which provides longer-term, patient capital to CFNE borrowers and new, expanding, and developing cooperatives.

1. Character (+)
Real Pickles was an existing successful business with strong reputation in the community and clear mission alignment. The original owners intended to stay on and continue contributing expertise and growing the business. The conversion was supported by a healthy network of cooperative technical assistance providers, accountants and attorneys. Prior to conversion, the five worker-owners had been meeting on a weekly basis for many months to plan the conversion.

The cooperative’s governance structure was appropriate to support the business goals. Board meetings are held monthly or based on agreed-upon frequency. In the coop, which was organized based on Massachusetts worker coop laws chapter 157A, each worker-owner has one vote and controls an equal share of the value of the business. Though the leadership and governance of the coop is democratic, the management of the business is hierarchical. The Board oversees the general manager, who oversees other workers.

2. Capacity (+/-)
The business had a solid track record of sales and strong growth prospects in the market. The business valuation, based on 5-year sales and marketing forecast developed by the future worker-owners, founding owner, and their CPA, appeared reasonable and was supported by second opinion evaluation by a different CPA. This provided some assurance that the fledging cooperative was not over-paying for the company.The company prior to sale was already highly leveraged at almost 3 to 1, and this would be true after conversion as well. It was important that the sale of the company not increase the burden of debt to the new cooperative.

3. Capital (+)
The equity buy-in for member-owners was set at $6,000 which was considered significant to ensure commitment, but not so high as to preclude participation. Additional capital was to be raised through a DPO process. Indeed, this would provide the primary source of financing the sale.

The founding owners demonstrated strong commitment to support the transition, including a willingness to provide some seller-financing if needed, and an employment contract requiring five-year retention and minimum hours worked.

Workers and owners committed significant planning time to plan the conversion, advised by a strong network of coop advisors. While not evident on a balance sheet, one of the businesses strongest assets was it network of cooperative advisors who provided support for governance policies and procedures, legal structure, financial education, and support for the DPO process. Some of those advisors included employee-owners of Equal Exchange (a successful worker-owned cooperative business), members of the PV Grows Network of food-based business advisors, loan officers and technical assistance providers affiliated with the Cooperative Fund of New England, and consultants from Cutting Edge Capital.

4.  Collateral (-/+)
There was a lack of collateral. The business had a $145,000 line of credit with local bank that was secured by a 1st position on all business assets, and the line was extended to the new cooperative. Any new lenders would be second in line. This weakness was somewhat mitigated by the relatively small investment by CFNE relative to the overall size of the deal, and that CFNE’s investment held priority to the relatively large equity investments.

Growth in the organic, fermented, healthy food market was strong, both locally and nationally. Market conditions were sound.

There was strong support in the region for local investing opportunities for local food businesses and cooperatives supporting the success of the DPO. Due to the timing of CFNE’s investment and the DPO opening, there was a risk of the DPO failing to raise sufficient funds to complete the deal. This was partially mitigated by a commitment by the selling owners to extend the coop a $150,000, 4% interest loan. (Ultimately this was not necessary due to the success of the DPO.)

Financial Analysis
Before conversion the proprietorship held $145,000 line of credit with local bank, and $67,000 in unsecured loans from owners’ friends and family (5 year, 6% due 2013, retained by owners). After the conversion, the cooperative assumed the $145,000 line of credit with the local bank, and to fund the purchase a five-year, 8%, interest-only loan from CCF of $69,000.

In the second year of the operations as a cooperative (FY15), RP has eighteen employees, seven worker-owners, some part-time and some full-time, and over a $1M in annual sales.

Lenders evaluating the strength of a potential deal should consider not only the maturity and success of the existing business, but also the depth, breadth and effectiveness of the existing business’ network of community support and reputational capital. According to Dan Rosenberg, as quoted in a previously published Project Equity Case Study of Real Pickles, “Over the last twelve years in business, Real Pickles developed a strong community network, and the backing of this network was absolutely vital to our success.”

As further noted in that case study, and relevant to lenders to cooperative conversions: “Another key lesson to be learned from Real Pickles’ example is the importance of maintaining a strong network of external support throughout the conversion process. The diverse group of advisors assembled by Real Pickles to guide it through its transition provided invaluable financial advice, legal advice, and general cooperative mentorship to Real Pickles.”

Additionally, in the absence of personal guarantees or strong collateral, where there is some risk tolerance on the lender’s part – favorable market conditions, substantial worker buy-in both financial and time, and the ongoing involvement of the founding owners are key elements in the success of this deal.