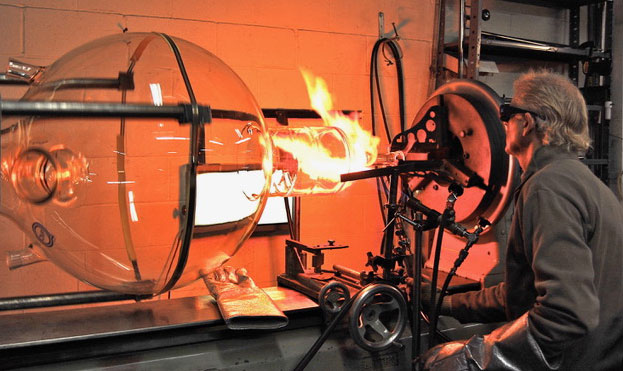 For the Love of Glass

Imagine life without glass. From eyewear to iPhones, from environmental remediation to the exploration of Mars, glass is fundamental to modern life, and continues to be a profoundly important material for the advancement of the sciences. Nestled in West Berkeley, CA, (in the area of the city zoned for light manufacturing) is an unassuming industrial building that is home 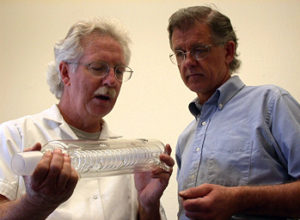 to Adams and Chittenden Scientific Glass. Started up in 1993 by Tom Adams (pictured on left) and George Chittenden (right), two skilled glassblowers who had minimal business experience at the time, it is now well regarded worldwide for its intelligent designs and for the quality and accuracy of its custom glassware (or “tools”). While their business is highly specialized, they now find themselves in a dilemma shared by many impending retirees. Their situation is increasingly common: they are seeking an exit strategy that works for them and their employees. Tom put it this way, “When it came time for us to think about succession, the thought of finding someone to buy us out seemed highly improbable. We have a very distinct niche in the manufacturing world, and there wasn’t any obvious path forward.”

Tom began scientific glassblowing in 1971, working for a different company which George joined in 1984, having previously apprenticed with a European-trained glassblower. Less than a decade later, an investor with a Master’s degree in business but no experience in glass bought that business. Within three years, Tom, the production manager, left and George, nervous about his future in the hands of the new owner, panicked. He went to Tom with a half-baked idea that turned into their now thriving company, Adams & Chittenden. Since then, they’ve outgrown their original location and added six employees.

Tom and George first looked at the idea of employee ownership through the National Center for Employee Ownership, an organization specializing in Employee Stock Ownership Plans (ESOPs). After an initial consultation, however, it became clear that an ESOP wasn’t workable at their scale. In March 2017, Tom was listening to NPR when he heard Alison Lingane, the co-founder of Project Equity, discussing their approach to helping another Berkeley business, one facing a similar predicament to their own, transition to employee ownership.  So, he contacted Project Equity, and the transformation at A&C began.

Transmitting a combined 80+ years experience in an idiosyncratic field isn’t trivial and the thought of passing on this accumulated knowledge in a short amount of time concerned both George and Tom. Would it really be possible for someone else to step into their shoes given the time frame? After all, when George and Tom started, they, themselves, weren’t seasoned business people, but they learned. As they transition their employees to owners, Tom and George notice their employees paying greater attention and taking responsibility for the work and the business. In addition, George noted, “hiring Project Equity as a third party brings objectivity to the table for the employees. The straightforward honesty with which they approach the work is credible and valuable. They help the employees understand that we are operating in good faith.” Project Equity also helps Tom and George continue doing what they do well—running the business. “Before starting with them, the process seemed daunting and relatively obscure, not to mention impossible to imagine as an additional burden” continued George. “Project Equity’s guidance and support in the formulations of issues such as bylaws, decision-making tools, legal issues, and the financial pieces have made it easier than we thought. They’ve delivered it in a clear and accessible format.”

When asked what’s next for both George and Tom, they smile with anticipation; the possibility of not having so many responsibilities and enjoying the fruits of their labor seems real and not so far away.

Hopefully, they will both be able to continue to enjoy the work as they begin their “glide path out.” As new coop members, they can continue to support the business and reputation they have built from scratch, and help shepherd in the next generation of scientific glassblowers. They have no doubt that this old-style craft can and will continue to be relevant in this century. And for them, slowing down is not a bad thing either!

Explore the journey to ownership for one of the employees